Adult Size: Most of the pickerel caught in Maine are age 3-5, at which time they range in length from 14-19 inches. Productive waters grow good numbers of 2-3 pound fish, along with occasional 4 pound fish. The state record, caught in 1992, weighed 6 pounds, 13 ounces.

Identification: Pickerel are a member of the pike family. The fish is green with the sides prominently marked by yellow-green areas broken by dark, interconnecting lines resembling the links of a chain. The jaws are elongated containing large, sharp teeth; the large dorsal fin is located way back towards the caudal fin, which is forked.

BACK TO: Maine Freshwater Fish Species 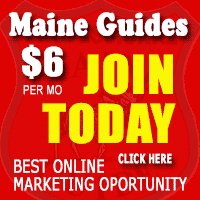